Hello and welcome to Issue 57 of “What’s New in Shortcuts!”

This week we’ve got quality-of-life fixes in the Mac beta, quick ideas from the community, 4 videos, 3 stories, one open-sourced app, and a deep dive from me into the new parameters in Take Screenshot on the Mac.

I also recorded another episode with AppleInsider that’ll be out the week after next, so I’ll make sure to link to that once it’s out.

Beyond that, I’ve been digging into upcoming releases, writing up work-in-progress pieces for members, and have my upcoming StreamDeck profiles coming along nicely – looking forward to finally sharing everything soon!

This week, Apple released the second beta of the next version of macOS and, in a good sign of progress, Shortcuts got two tiny quality of life updates:

First, Jason Snell noticed that Menus, like those from Choose From Menu or Choose From List, have been slightly redesigned to better account for data inside – here’s the original version:

Plus, someone asked in the replies if these fields could be confirmed from the keyboard as well – I checked and found out that indeed they can, pressing Enter will confirm the Done button:

This still isn’t the case with Ask For Input, however – pressing Enter correctly allows you to enter a line break, but Command + Enter does not confirm those dialogs (I’ve reported this as FB9755265).

💡 Ideas from the Community

I came across a handful of great Mac ideas from the community this week – folks have still been excited since the launch, which is great to see:

Josh Puetz shared a shortcut for generating Markdown image references, something I also forget how to format regularly:

Sridhar Katakam shared a shortcut that gets the current URL from Safari and copies it to your clipboard – he’s assigned it to Command + U as well:

Rick Dronkers also shared a nice contextual shortcut – it changes focus, quits everything except a few apps (and makes sure changes are saved), then pops open the apps he needs and prioritizes two of them split across the screen in front:

Shortcut mode in MacOS is pretty powerful. I’ve created a new shortcut called “planning mode” which opens my todo list, calendar and notes, quits all other apps, and deactivates all notifications for 30 min. This was just the first thing that came to mind, lots of potential… pic.twitter.com/uxroM7M5QH

🎞 Videos to check out

Creators are also diving into Shortcuts again—both on iOS and the Mac—so we’ve got a handful of great videos this week:

Chris Lawley put out another great shortcuts video covering 13 of them he uses daily – make sure to peep his Mac tips as well:

Shane Whatley has also covered Shortcuts for Mac and what apps like Signals for HomeKit mean for the platform – definitely check this video out:

Another great video I came across is this walkthrough from MacMost – it walks you through using the Live Text feature on screenshots to capture anything from your Mac’s screen:

You can create a Shortcut that will allow you to capture a portion of your screen, and then the text from that image will be extracted and placed in the clipboard. This is useful where you can’t normally select and copy text from websites and apps.

Elsewhere on the web, I also saw three articles related to Shortcuts worth checking out this weekend – and one open-sourced app:

Jason Snell wrote up a walkthrough for his “Template Gun” shortcut rebuilt from a TextExpander snippet – come for the functionality, stay for the screenshots:

Matt Corey is continuing his Signals for HomeKit blogging with another great example for the app (here’s one from last week too).

This piece covers using door sensors as HomeKit triggers that are monitored via Signals and then kick off a Mac shortcut directly to change your Focus mode – I recommend looking at the shortcut itself regardless because his Data Jar method is a good way to manually track what Focus mode you’re using:

Use HomeKit and Shortcuts to Pause your Work when you Leave your Office — HomeMade Automation — homemadeautomation.squarespace.com

Time for a break? No problem – learn how to create a Shortcut to pause your focus session, and trigger it automatically when you leave your office!

Federico Viticci published a Club MacStories exclusive last week that’s worth checking out – he covers everything you can do with Reminders, plus goes way beyond, Viticci-style:

In this second lesson, I’m covering another set of actions that showcase the advantages of Apple’s built-in apps: the Reminders actions.

Actions for Shortcuts is now Open Source as well – take a look at the source code and see how an app like this is put together:

Supercharge your shortcuts. Contribute to sindresorhus/Actions development by creating an account on GitHub.

Taking Screenshots on the Mac

In the iOS 14 cycle, Apple added a new action to Shortcuts – Take Screenshot.

However, I initially found it odd to use with the iPhone and iPad implementation – it’d take the screenshot immediately, meaning you had to create some sort of setup where you add a Wait action to delay the shortcut until your actual screenshot was ready (rather than capturing the shortcut itself or the Siri interface).

Paired with the Return to Home Screen action, it made most sense to me as a method for capturing one’s Home Screen setup:

Returns to the Home Screen via Toolbox Pro, then waits just under 1/2 second to take a screenshot (so it shows the dots for widgets), then saves it to a pre-created Home Screen album in Photos.

Otherwise, taking screenshots can also be useful via Siri when you are in another app. For example, one idea I came up with was reviewing pages in the Health app, screenshooting them, and sending them to family members – but Apple has since added Health Sharing as a system feature.

Once Shortcuts for Mac launched alongside macOS Monterey and iOS 15, however, the Take Screenshot’s origins made more sense – on the Mac, the action has parameters, which gives you multiple different ways to take your screenshot.

By default, Take Screenshot on the Mac lets you take a “Full Screen” screenshot. Using keyboard shortcuts, this is equivalent to Command + Shift + 3.

Plus, if you have a second display, you can prevent that screen from being captured by tapping Show More and toggling “Capture Main Display Only.”

Instead of a Full Screen screenshot, the parameter can also be changed to “Interactive.” When set to Interactive, a “Selection” parameter appears, set to “Window” by default.

This lets you take a screenshot of just one particular window (this includes automatically-generated space around the window so the screenshot looks nice too, a nice feature of macOS). Using keyboard shortcuts on the Mac, this is equivalent to Command + Shift + 4 and then hitting Spacebar.

Here’s what a “Window” screenshot looks like after – notice the extra spacing and drop shadow around the border:

Change the Selection type to “Custom” then lets you use a manual selection tool where you can pick a specific shape by clicking and dragging (for folks Command + Shift + 4 for screenshots, this is the same as that default):

There is no solution in Shortcuts equivalent to Command + Shift + 5, which both activates the “Capture Selected Portion” that defines a specific box to capture, as well as the actual system utility for “Screenshot.”

The Screenshot feature lets you change the screenshot type from a menu, plus do screen recordings, and change timing, where to save, and other options – perhaps another parameter for this action could include “Show Screenshot Utility”:

It’s also important to note that “Take Screenshot” is only a capture action and doesn’t automatically save its result alongside normal screenshots – you’ll need to Save to Photos or Save to Files if you want to capture them into default locations, or add in a more specialized flow to place them wherever you might desire:

I’ve previously set up a series of Screenshot shortcuts enabling folks to move their iOS screenshots out of Photos and into Files, renamed the same way they are by default on the Mac – that way I can have one directory of all my screenshots. If you’re a member, here’s the write-up (and the Hazel rule for the Mac):

Hello members! This post will walk you through my new Screenshot Workflow, which consists of two shortcuts… and a Mac app!   Get access to the full post by signing up for a membership.

With these Mac additions to the Shortcuts action, however, I’ve further improved my system by integrating them into the process.

I’ve added an appended “Window” and “Selection” option the titles so I can further identify which type of screenshot I’m searching for without physically opening the file to see – members can get the Mac screenshot tools on my site (these work great in the Menu Bar):

Takes a screenshot, reformat the name to the style used on macOS, then saves it to /Shortcuts/Screenshots/ in iCloud Drive.

Takes a full window screenshot and leaves out the background.

That’s it for this week!

Until next time, please reply with any requests you have for Shortcuts for Mac – I want to know what problems people are looking to solve 🗳 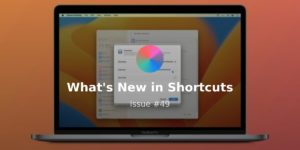