Welcome to Issue 40 of “What’s new in Shortcuts” – and to mid-summer!

With the public betas out last week and another developer beta still on the way, we’re in between the latest features and fixes for common bugs – but this time I’ve pushed through the issues and made some new shortcuts for all you folks.

Plus, I discovered a handful of actions for Apple Watch and Files that I’d missed – read on to get all the details:

🆕 New from me this week

While we haven’t gotten another developer to help with the general bugginess of Shortcuts, this week I shared some of my Home Screen/Focus setups in a stream with Doc Rock, plus I created three shortcuts for everyone on the public betas to try out.

On Tuesday, I had the privilege of being a guest on Doc Rock’s livestream to talk about Shortcuts for creators (and beginners) for almost 2 whole hours – what a blast. I absolutely love sharing with folks & their communities like this—especially folks who aren’t as familiar with Shortcuts—cause every idea just blows their mind 🤯

This quick launcher for my favorite App Pairs helps me skip extra multitasking steps while also activating Focuses and hiding home screens in the background.

Presents a menu with a variety of app pair choices and opens the resulting choices, plus sets a corresponding Focus mode.

One action that I missed in Developer Beta 2 was the Open Location action – I’m using it in the following shortcut as a quick opener for Files. Plus, instead of specifying a location, Ask Each Time shows the most common locations and provides a lot of options for accessing Files with just one action.

Uses the “Open Location” action set to Ask Each Time to present a list of the folders and tags saved in the Files sidebar and opens into the chosen location.

Another action I missed in the latest betas was Get Watch Faces (and Get Active Watch Face) which can be useful in combination with Set Watch Face.

For the following shortcut, by keeping my Personal faces on the left (as the first 10 in the set) and Work faces on the right (starting at item 11), I can programmatically grab just the right faces for each area and set them accordingly.

Presents a menu for Work and Personal options, then grabs a section from the list of current Apple Watch faces, then lets you pick one to set as the active face.

🔗 Links to check out

Michael Tsai is a prolific link blogger who often captures a disparate set of thoughts from the Apple community into a single post that generally represents a spread of reactions – here’s his post on how Apple bloggers reacted to Shortcuts for Mac back during WWDC week, which is worth a look-through:

Shortcuts is coming to macOS, and your apps are a key part of that process. Discover how you can elevate the capabilities of your app by exposing those features as Shortcuts actions.

Ben Vessey has created another set of paid wallpapers for his Dynamo series that are designed for Shortcuts automations – it uses a colorful take on the Finder icon, which switches from blue to yellow to red depending on your battery life levels:

Ben Vessey has released some new iPhone battery wallpapers as part of the Dynamo series. These wallpapers use shortcuts automation.

Josh Holtz has created a clever meta-system for running shortcuts as regular intervals using a whole markup system that gets interpeted by another shortcut and gets scheduled to run at a particular time – check out the concept:

💡 Shortcuts ideas from the community

This week, I also wanted to share a set of ideas I’ve come across on Twitter – these are people who are excited about their work and posting it freely, which I encourage everyone to do! Here’s what folks were up to this week:

Jimmy Little has shared a preliminary video on how he’s now using Shortcuts for Mac to make Notion API calls to generate pages programmatically – this is right up my alley for sure:

The renowned Stu Maschwitz has also created another one of his mega app-like shortcuts to entirely replace Foursquare using Shortcuts – Stu makes excellent shortcuts like these for his Prolost beta program, so I definitely recommend checking it out:

I got creeped out by what looked to me like signs of data-hungry death throes of Foursquare/Swarm, so I nuked my account and built my own private location check-in tool using Shortcuts. Prolost Beta subscribers get early access. https://t.co/QNDufQjqv6 pic.twitter.com/Ozv9WxmZsB

Twitter user Ben has also put together a clever system for tracking his Fitness+ workouts in a dedicated spot in Day One by pulling the data using Toolbox Pro and inserting it as an entry:

One of the new features for Shortcuts in iOS 15, iPadOS 15, and macOS Monterey is an improved display view for the output of every action, as Alex Hay of Toolbox Pro has highlighted:

The new Shortcuts editor’s output previews have had a big upgrade on Monterey/iOS15.

Here we can see a map image being displayed and content from photo and Vimeo URLs being automatically loaded. pic.twitter.com/H7cnP0lX6G

Now, after every shortcut is run, the small box that displays the final media passed out will try to intelligently display the content from one of three ways:

The grid view matches the original style, showing a single item first (and the rest in a swiping list if there are multiple).

Then, the grid attempts to display the media as an icon set, much like the grid view on macOS – you can see the density of items as well as content types.

Finally, the list shows a vertical represntation of all the items, which is especially helpful if you have a long list of items with lots of metadata attached – it’s easier to scan and see any sub-values right inline (that you can extract in later steps).

I have found a bit of the display to be weird – some text you used to be able to copy out of the single view, but now you must hit the “Expand” arrows and grab it from the full-screen detail view, for example.

Overall, this a somewhat simple change, but provides more clarity on what’s happening at the end – I had to suss out the different views myself over time before and now they’re clearly declared on the window.

For reference, here’s Apple’s guide on “Completing a shortcut run” for how this behaves in iOS 14 & previous versions.

That’s all for this week! Remember – if you have feedback about the newsletter, please feel free to reply below 🙏 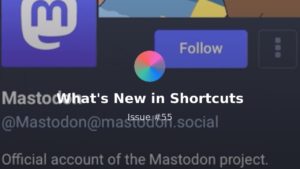 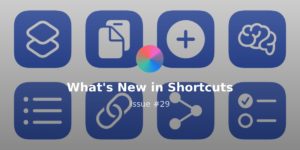