Believe it or not, we’re still just out of the second full calendar week of 2021 – it’s felt way longer than that though thanks to ~current events~.

This week was a bit quiet on the technology news front, but that just means more room for building up new routines with Shortcuts – here’s how I’m using it to gain momentum and avoid doing the same work twice:

With the Consumer Electronics Show (CES) going all-digital, this week was full of new products, new ideas, and 100% less walking than I did last year at my first time at the conference in Las Vegas – here’s how I tuned in without overdoing it:

Continuing the introduction to Scripting actions in Shortcuts from last week, it’s helpful to focus on how the List actions can be used – mastering these is important and you’ll be using them in no time:

Lists create an output that’s an array of items, similar to the results of many “Find” actions. One somewhat unknown function too: filling it out creates the same result as using Add to Variable.

In effect, it lets you fill out one detail in your flow by picking from multiple choice options – that’s in contrast to Choose From Menu, which changes the flow depending on the choice you pick (and also doesn’t pass the title of the chosen item out).

I like to use Get Item From List to scrape information from URLs by splitting them by the forward slash (/) and then getting the data at the specific index I need (look at some of the related shortcuts linked on the page for specific examples).

I’m trying to do a lot more real-time processing of information I’m capturing and turning it into something useful in the moment – here’s three shortcuts I put together this week to do just a bit more work now to save me lots of time later.

Connecting with members directly has already been a blast so far! I want to collect and solve all your Shortcuts problems/needs as best I can, so turns out talking directly works fairly well 🙂

I also want to move up the ladder to sharing more complex but condensed workflows that anyone can start adopting – let’s build some together:

I made a list of Shortcuts problems to solve while live, so I’ll be creating those for members soon – plus I’m adding in timestamps to the stream this week for anyone who wants to watch back. Get the link to the stream on the Extras page.

I spent some time cutting out a bunch of unnecessary steps that I’d do without the checklist anyway and rearranged them to flow a lot better – check them out.

I’ll be showing off some shortcuts I built from questions during the last stream, take new ideas and build some live, and we can have a fun start to the weekend – click the link on the Extras page to get notified when the stream goes live.
Hoping you all stay well this week!

Learn about the Membership 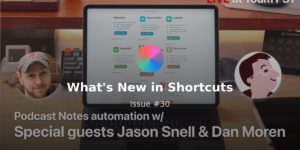 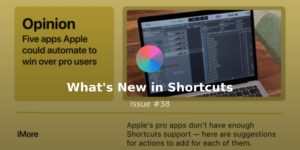