Welcome to Issue 43 of “What’s New in Shortcuts” – this week we saw developer beta 4 and another public beta, bringing a new action to Shortcuts, a new feature, and stability improvements.

Plus, the newsletter finishes off with a set of Power automations, both with full screenshots and linked shortcuts you can copy yourself.

But before we get into everything, a programming note – I’m out next week on vacation, so I won’t be sending an issue next Friday, August 6th. After that, I’ll be returning to the normal schedule on August 13th.

Until then, here’s what’s new this week:

This week we saw one new action, plus a new Siri feature discovered in the developer betas and new Suggestions capabilities for iOS 15 – a sneaky set of updates that you might miss if you’re not looking:

In the latest developer beta, I came across one new action – Return to Home Screen. Now, shortcuts can be programmed to essentially close and end the current session, enabling things like a smoother Siri experience and solving the oddity of Share sheet shortcuts just finishing and the sheet being open.

Shortcuts has a new “Return to Home Screen” action in iOS 15 developer beta 4 – this has been long requested from the community and is great to see! pic.twitter.com/8E3ZB7FIYX

In the Shortcuts User Group, Stu Maschwitz shared his discover of a new Synonyms feature that’s available in Shortcuts in the Choose From Menu action.

With this, anyone can define alternate phrases for menu items that they might not get exactly right when speaking out loud to Siri – now, you can pre-program more options for the same menu item and speak any of them to select that item when running the shortcut verbally. 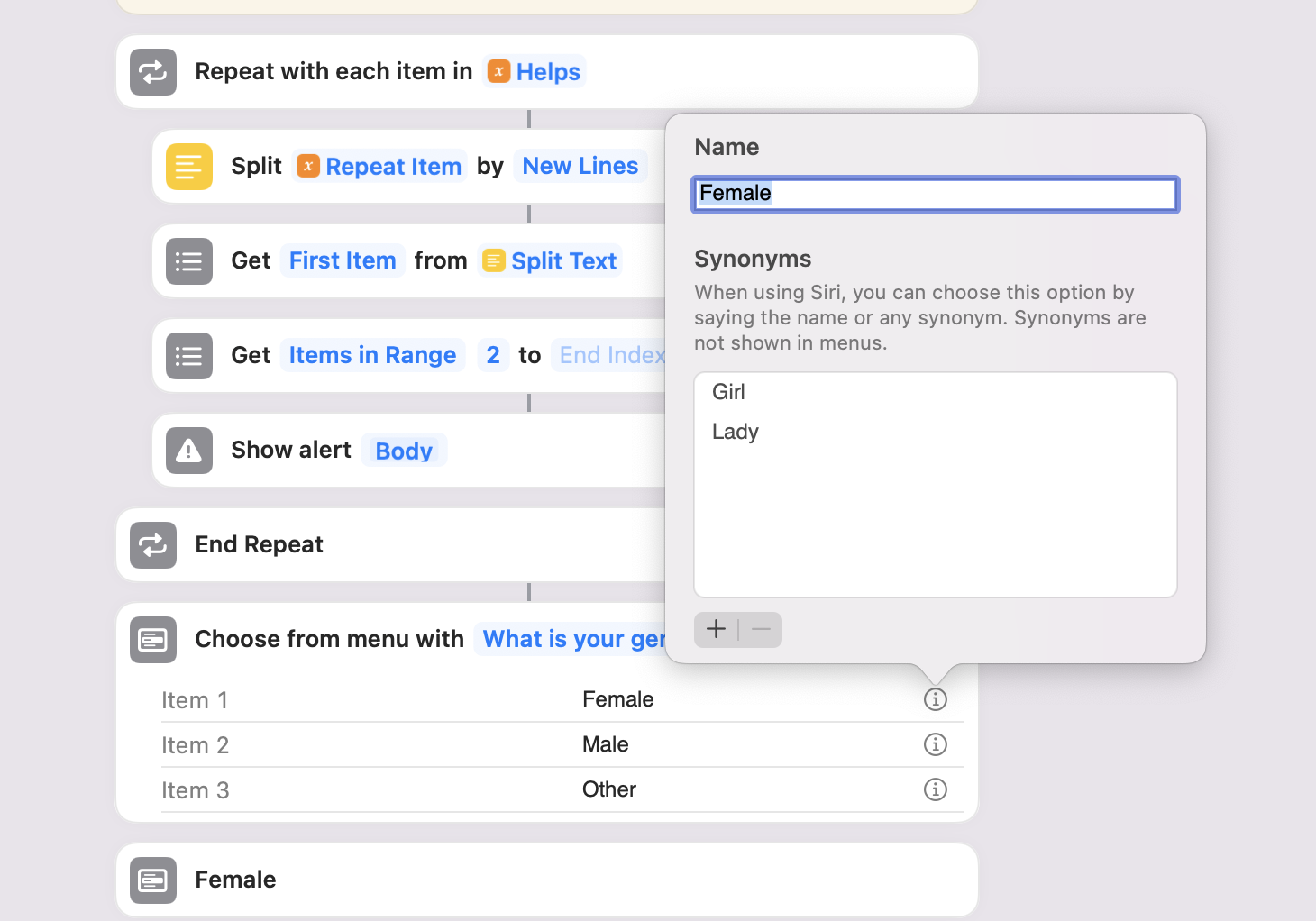 Lastly, I noticed that the Siri Suggestions widget on my Home Screen was recommending an action based on my usage during a Focus mode – I’ve created a few items in Fantastical in my Personal mode this week, so that follows accordingly.

Overall though, this feature will be great – suggestions based on context makes a ton of sense and I think this will help people get even more out of suggested actions once they spend some time with iOS 15. 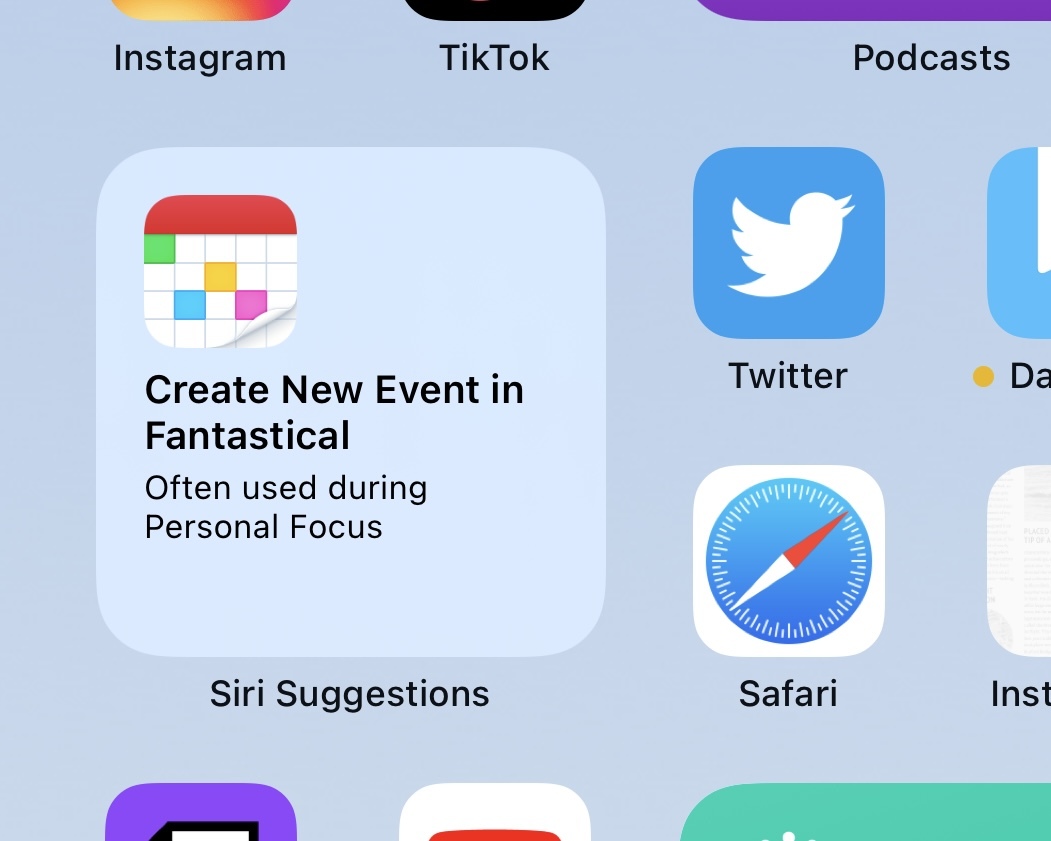 This week, I explain the latest Siri deprecations, AppleInsider has a Shortcuts for Mac guide, and Jeff Perry shared his icon set:

Apple made an announcement about the deprecation of some Siri intents that’ve long been part of the ecosystem – but, as I explained on Smart Tech Today, it’s not actually a huge deal because developers like Uber already weren’t using the Ride Share APIs, plus there are new capabilities like the Get Ride action that can do the same thing in Shortcuts.

What remains to be seen, however, is how users can trigger these commands without setting up the Shortcuts first – I wish developers could define a preset trigger phrase for all their actions that anyone could speak to Siri as long as the app is installed and then she’d just add the shortcut afterwards or send it to Notifications to install later.

Starting with the customer release of iOS 15, iPadOS 15, tvOS 15, watchOS 8, and macOS Monterey this fall, select SiriKit intent domains will be deprecated and will no longer be supported in all new and existing OS releases.

The folks at AppleInsider have put together a walkthrough of all the features for Shortcuts for Mac – this is quite close to what I’ll be sharing for members in a few weeks, although I have a few tricks up my sleeve they didn’t include 😏:

How to run Shortcuts on macOS Monterey | AppleInsider — appleinsider.com

Shortcuts are the fastest way to get a lot done on macOS Monterey, but at first there’s little to tell you how to actually run them. Here are all the ways to launch a Shortcut fast.

Jeff Perry has shared a set of wallpapers and app icons that are great for using the Set Wallpaper action and Add to Home Screen feature of Shortcuts – I’m planning on using these on my Stream Deck as well:

How to Make Your Notes More Valuable — tablethabit.com

How to make your notes, saved links, etc. more useful to you. Plus: free wallpapers and app icons

👥 Updates from the Community

This week there’s a new app in the works, a demonstration of Wind Down shortcuts, and a classic Siri Shortcuts order fit for any fast food lover:

Vatsal Manot has put out a call out on Twitter for people to register for a beta of his Shortcuts-adjacent app that will add Notion actions – this looks like a wonderful replacement for the set I built on stream, as I’d always rather have native actions than making API calls myself:

Twitter user @cloudssayhello shared a video how he’s using the Relax action from his own app as a Wind Down shortcut, which lets it appear in a special menu on the Lock Screen during the time period before your device goes into Sleep mode at night – it initially took me a long time to find this setting, so check out the User Guide article on this too:

By far my favorite and most used feature on my app. Wind down shortcuts allow easy fast access to sleep sound. Good night 🌙☁️ pic.twitter.com/K5HZOUoDQn

Lastly, I came across this superb joke on Twitter and just couldn’t resist – I love when someone much funnier than me makes a solid Shortcuts joke (I added images 2 and 3 of the photoset inline):

a masterclass in modern UI pic.twitter.com/A0UKnpZ51g 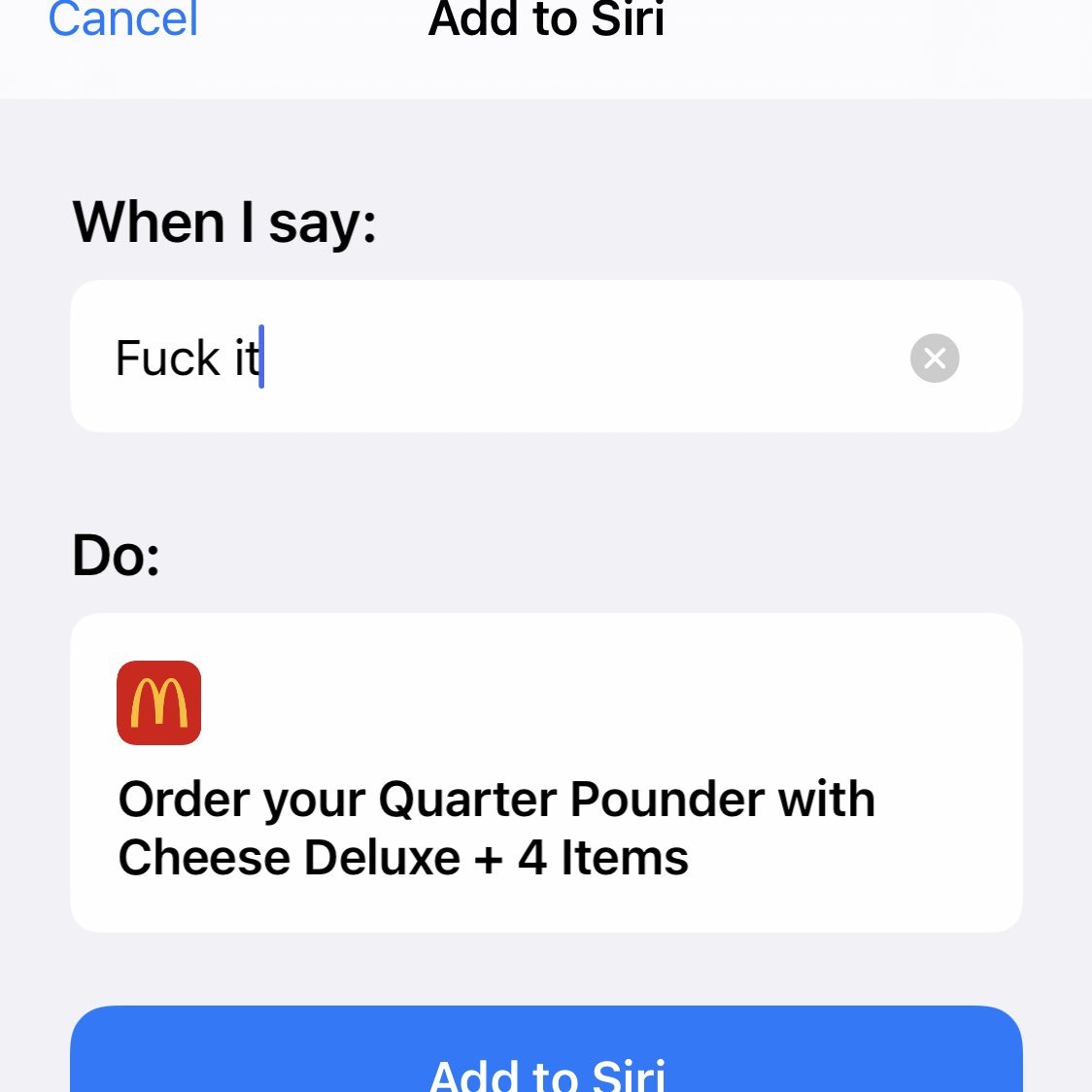 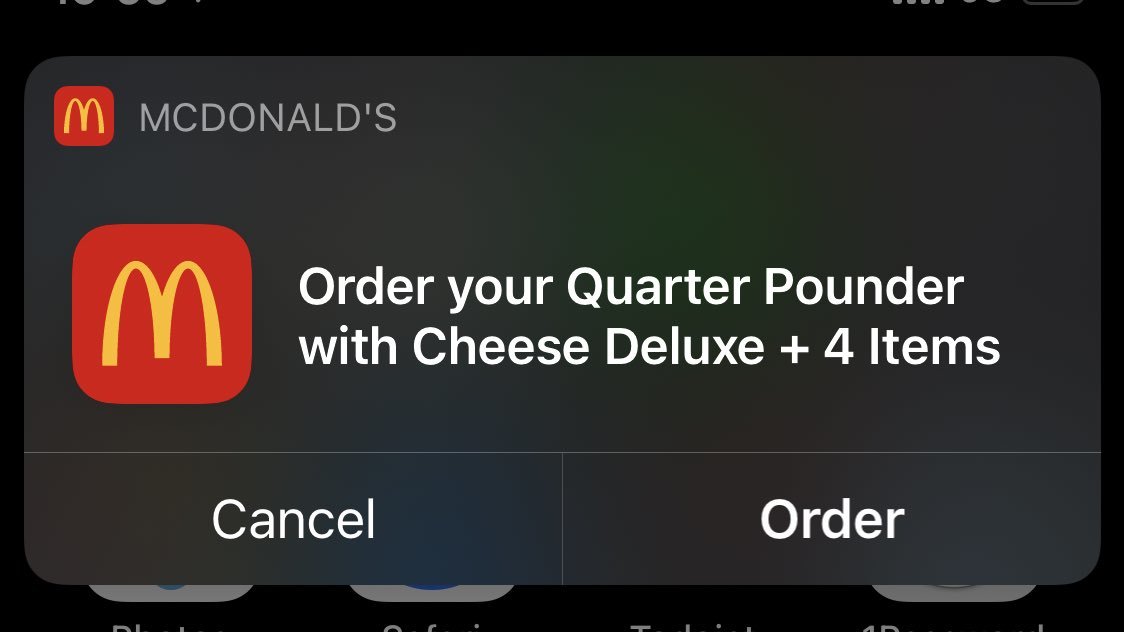 I’ve mentioned a few of these before, but for anyone testing out Shortcuts for Mac, the following apps already have actions that show up in the app and can be used in your macOS shortcuts today – plus a few coming this fall:

Timery, from developer Joe Hribar, recently launched on the Mac and includes this wonderful Menu Bar feature – plus the shortcuts already work on macOS Monterey:

Timery 1.2.1 is out! Just some small improvements and fixes. Plus on the Mac, show Timery in the menu bar!

Data Jar for Mac is now officially in beta, which means folks like me can keep using any integrations built on iOS – I’ve got a slew of my Airtable API shortcuts built off this, so now I can keep going full steam ahead on Mac this summer! If you’re on the beta, sign up in the tweet:

Since WWDC I’ve been working on bringing Data Jar to the Mac. Now I have an early beta build ready.

Want to help me test Data Jar for Mac? Get the build here👇https://t.co/8if9Ikwwof

Camo also dropped in their Shortcuts support for the beta period – this app and a spare iPhone make a real solid alternative to fancier webcams, since your phone has just as good of a camera! Now you can automate the setup process and even switch lenses using Shortcuts for Mac:

Shortcuts — on macOS! 🤯🤯 As a treat for users on the macOS 12 beta, we’ve added Shortcuts support for setting the current device, lens, resolution, mode, brightness, and more! @ us with the shortcuts you come up with! pic.twitter.com/AYuL5etfzp

Charty is also making its way to the Mac, which will be a wonderful addition as it may be the first user-accessible way to generate charts on the desktop? I only know how inside Excel or Numbers, but Charty could easily become the way to generate quick charts from data by passing it through Shortcuts first:

Getting closer to a Monterey version of Charty!
Thankfully, the actions seem to be working well on the Mac! 😍 pic.twitter.com/C2GcR8sbUM

Signals, a HomeKit app that uniquely flashes your lights on/off for you, is also coming to the Mac – I’ve got a few custom signals set up as widgets on my Home Screens, so having this control in my Mac automations will be great too. Plus, I just so happened to use this app on my latest stream and in the shortcuts for today’s Spotlight, so read on below to get an example of how I use it:

Some big things coming this fall – Signals for HomeKit will be taking advantage of the power of the Mac! pic.twitter.com/Wb1xJAsnes

Drafts for Mac is also bringing powerful Shortcuts support to the Mac – there was a bug that bit users in the previous beta that’s now resolved, so folks can get back to beta testing at the link below (on iOS too):

Following up with last week’s intro and the subsequent livestream I did on the set of Power automations—Battery, Charging, and Low Power Mode—I have a set of shortcuts for each option that everyone can enjoy.

I’ve built single shortcuts that you can download and use in the corresponding automations with the Run Shortcut action, or you can follow along using the batch of screenshots I’m sharing for each: 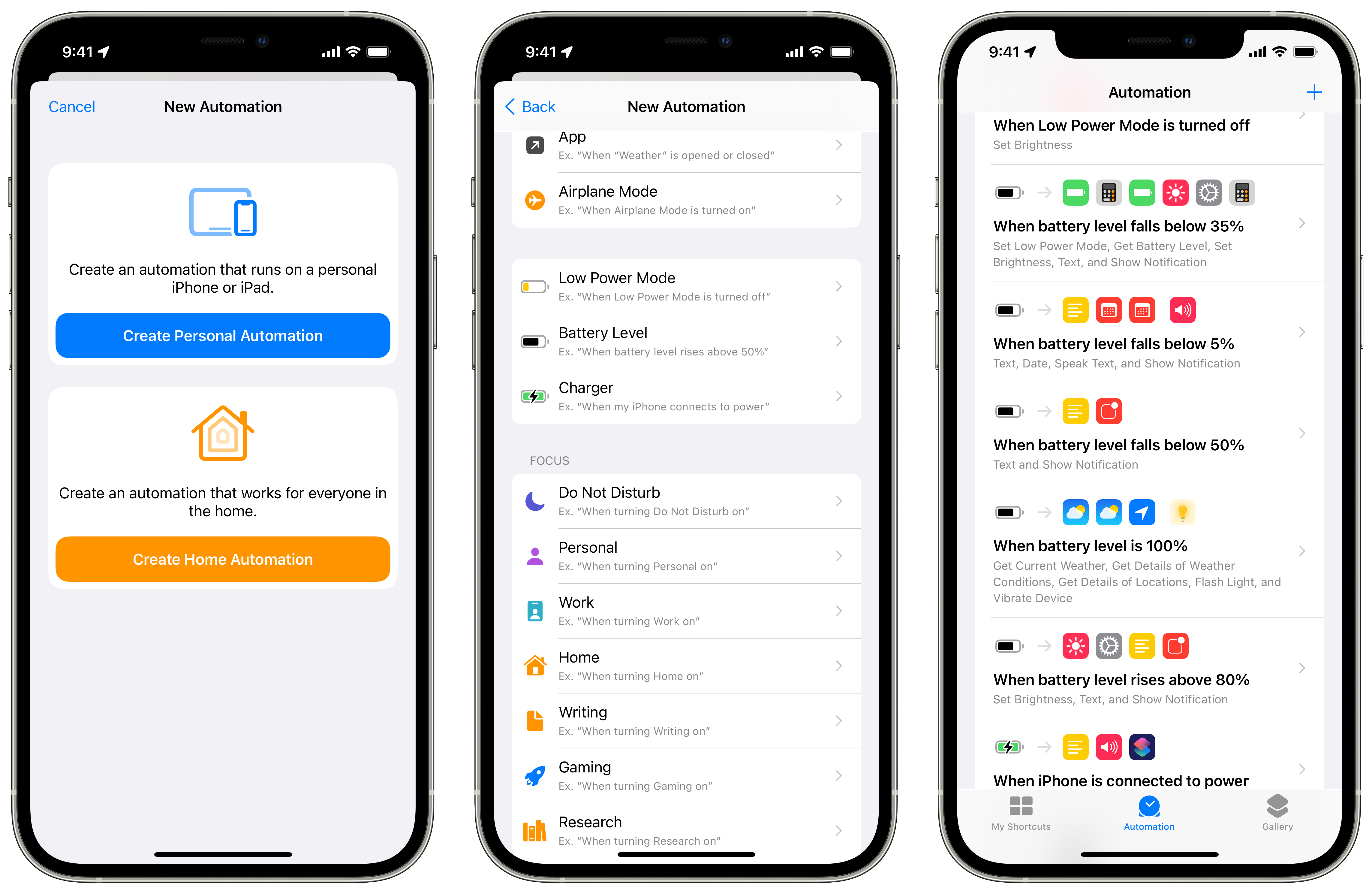 When Low Power Mode is turned off, this assumes your device is charged enough when the setting is toggled off and turns up the brightness accordingly: 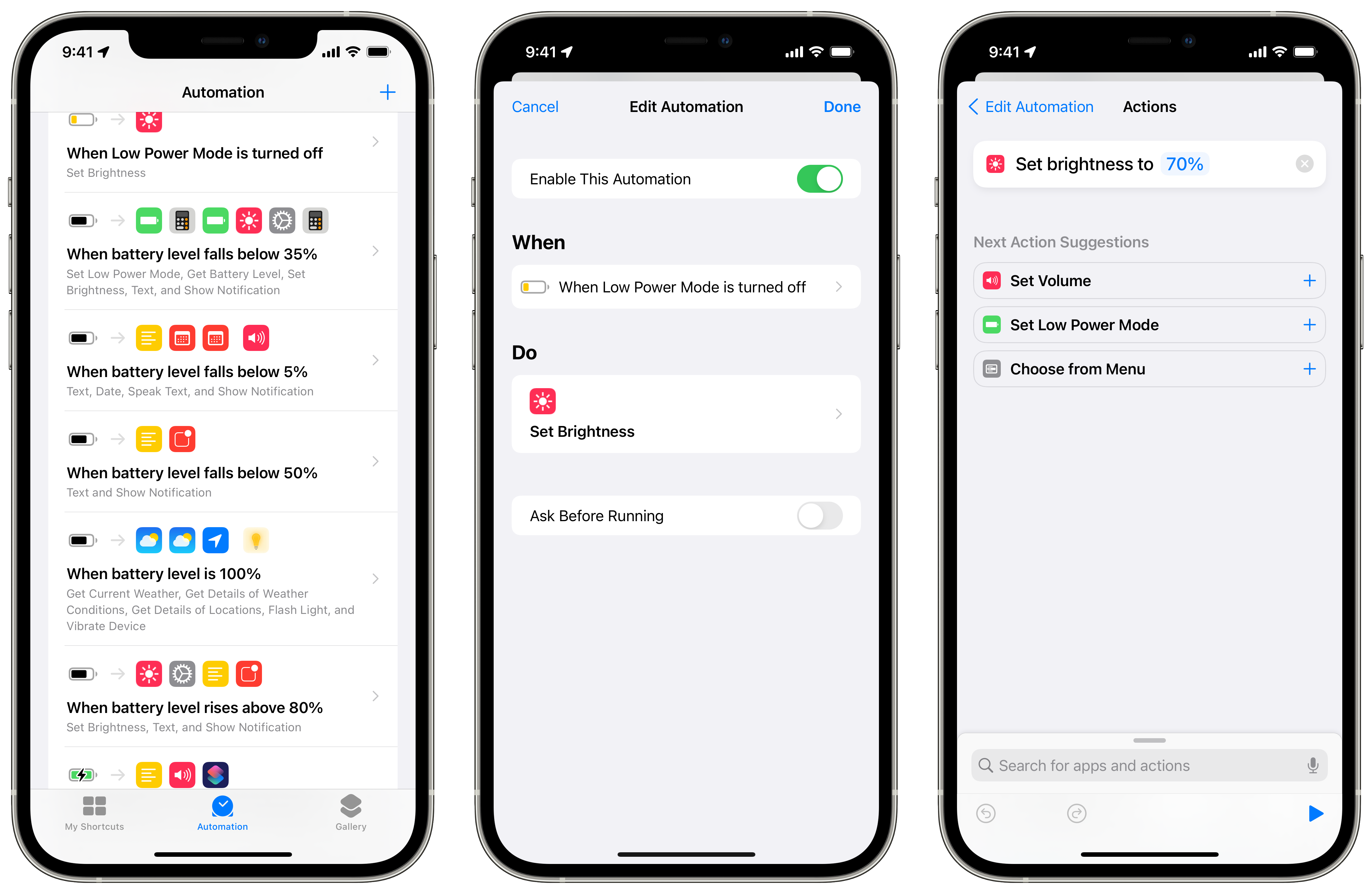 When Low Power Mode Is Turned Off – Matthew Cassinelli — www.matthewcassinelli.com

Sets the device brightness to 70% anytime that Low Power Mode is turned off, whether automatically while being charged or manually from Control Center/Siri.

Built as a Charging automation, this humorous example will give you a kick – I set it up and forgot about it, and laughed out loud when it actually went off. Get the Honk shortcut too to make it extra obnoxious. 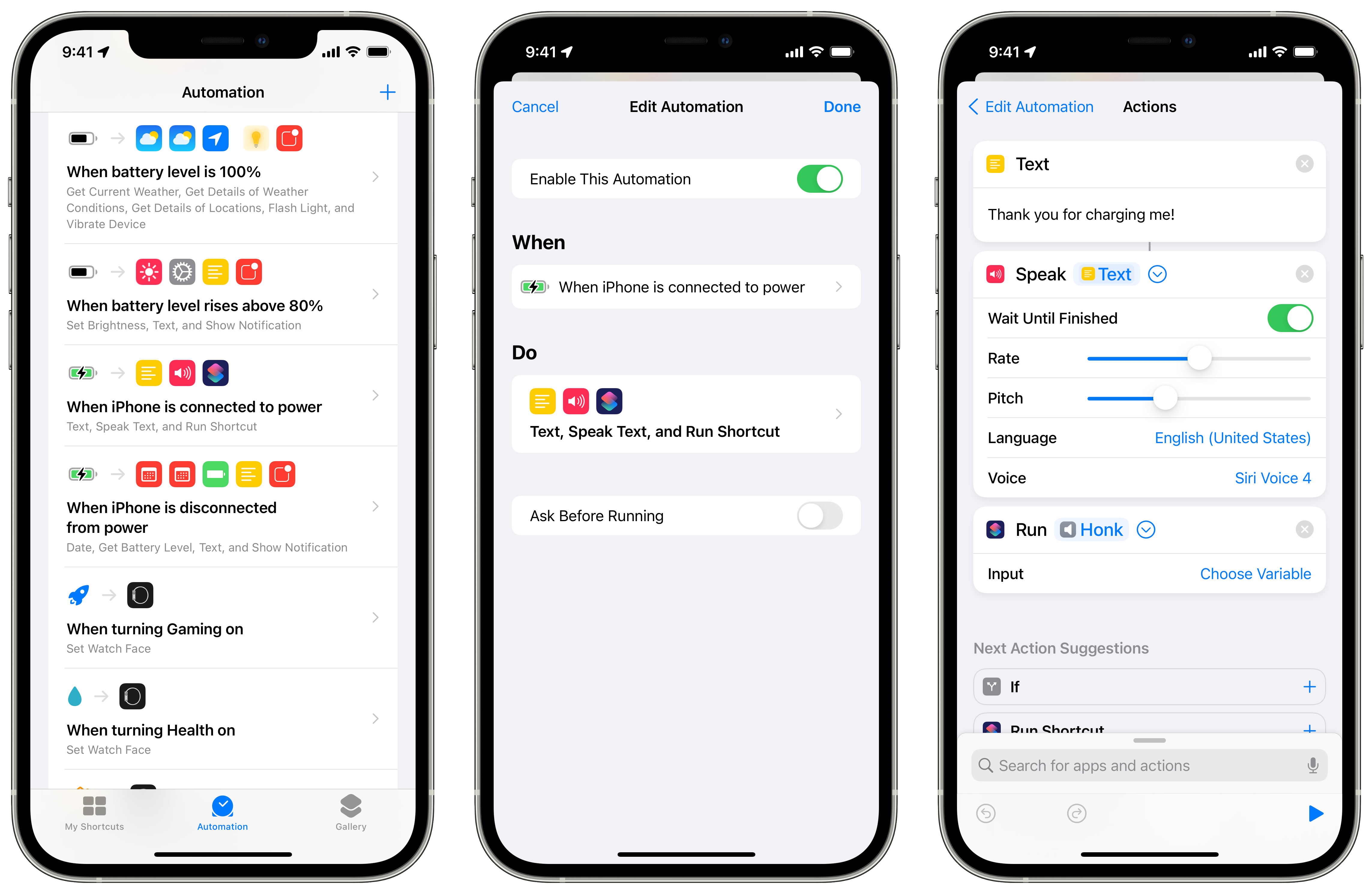 When iPhone Is Connected To Power – Matthew Cassinelli — www.matthewcassinelli.com

When the device is connected to power, speaks out “Thank you for charging me” and then honks liked the Untitled Goose Game.

With this Charging automation set to “Disconnected”, this lets you know later on how long it’s been since you charged and at what percentage your device was last time it stopped charging: 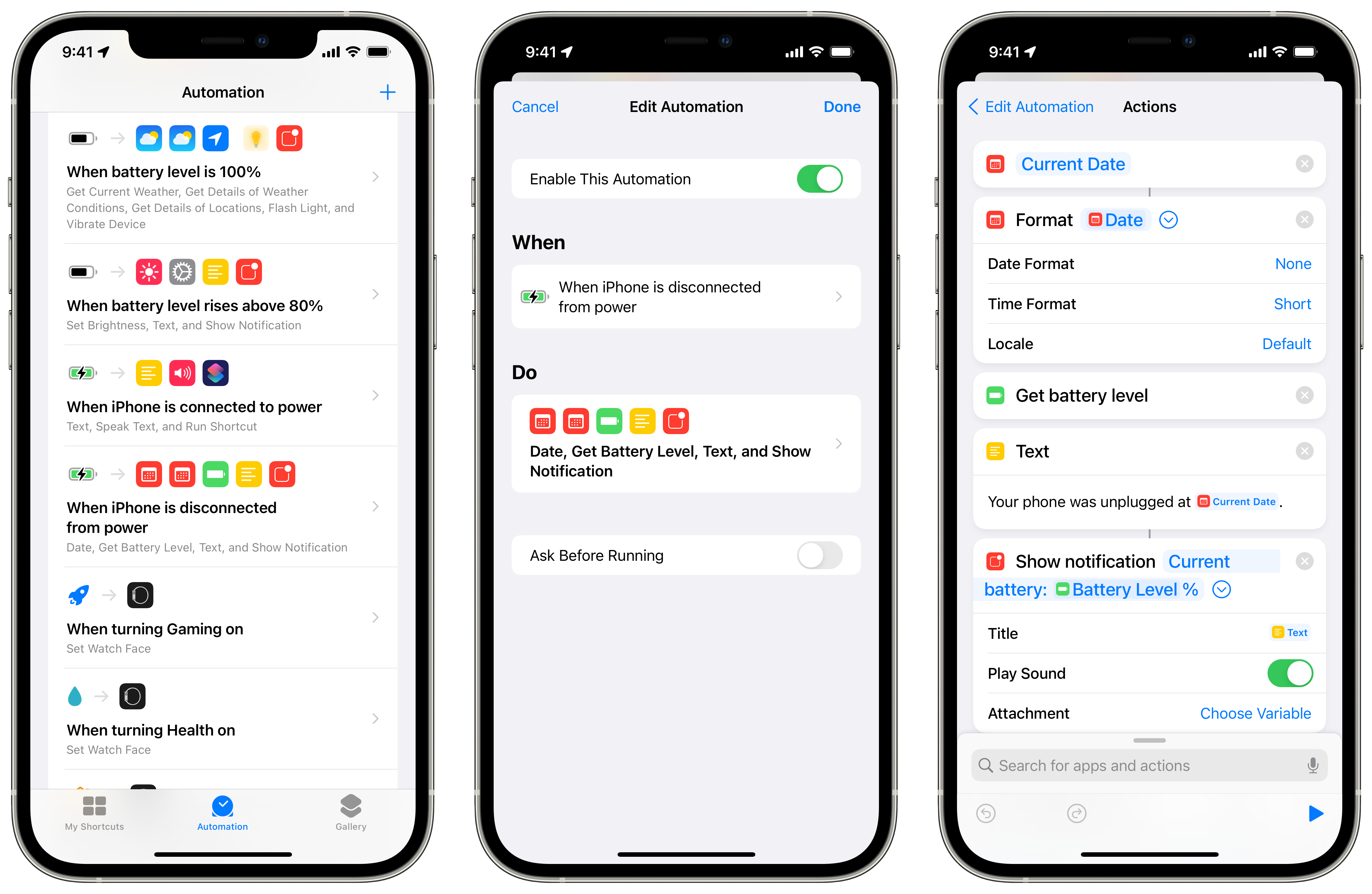 When iPhone Is Disconnected From Power – Matthew Cassinelli — www.matthewcassinelli.com

When your device is disconnected from power, this will send a notification letting you know the time and battery level

I use this shortcut built with the Signals app to notify me that my phone is fully charged by flashing the light next to my desk in the office, as well as vibrating the device – check out the Weather trick for grabbing the location too: 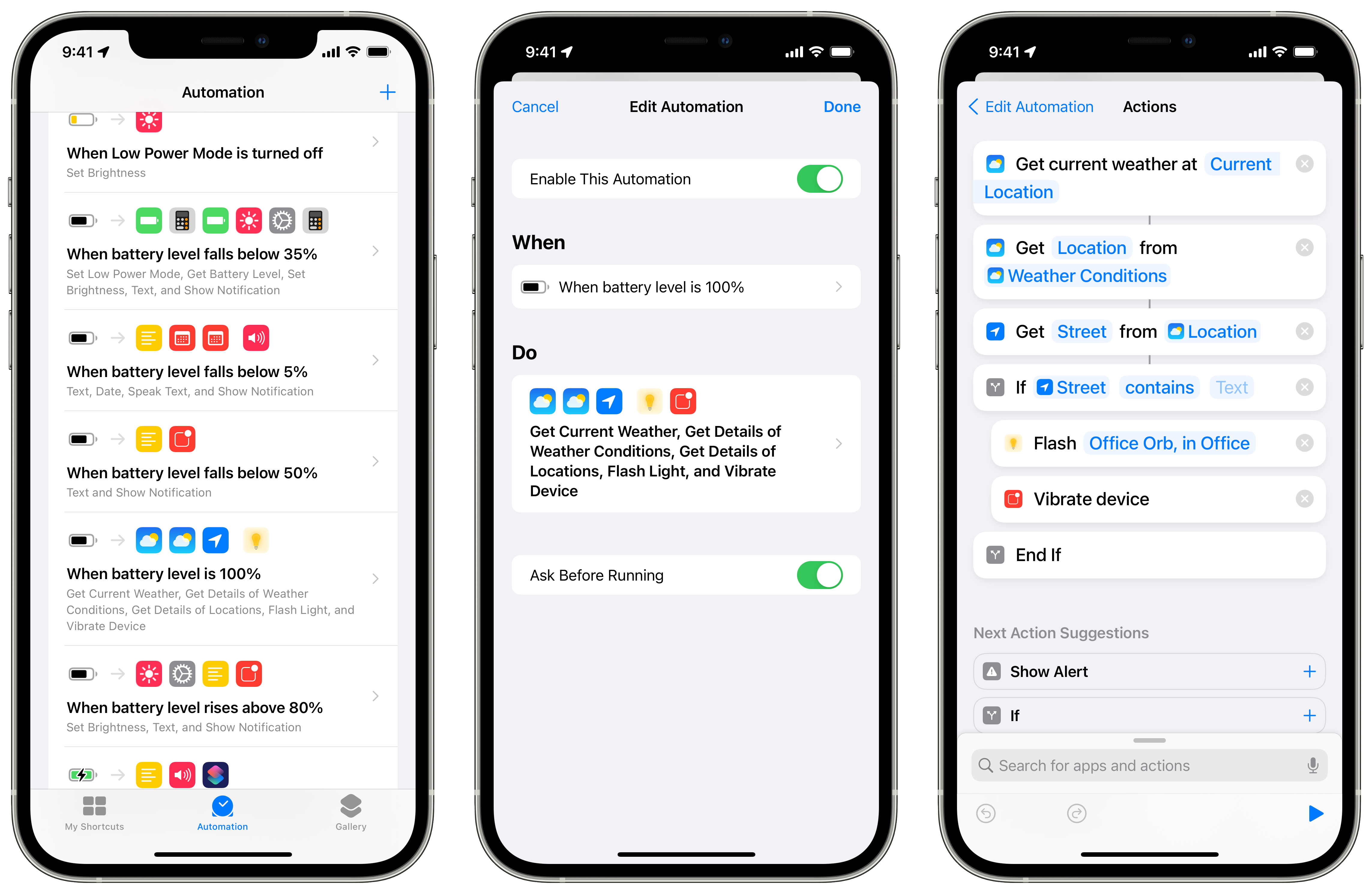 When Battery Level Is 100% — www.matthewcassinelli.com

When your battery reaches maximum, checks your location and, if you’re at home, flashes the Office light using the Signals app and vibrates the device.

This matches the smart charging that’s built into the iPhone to prevent unnecessary charging above 80% and prompts you directly to actually unplug: 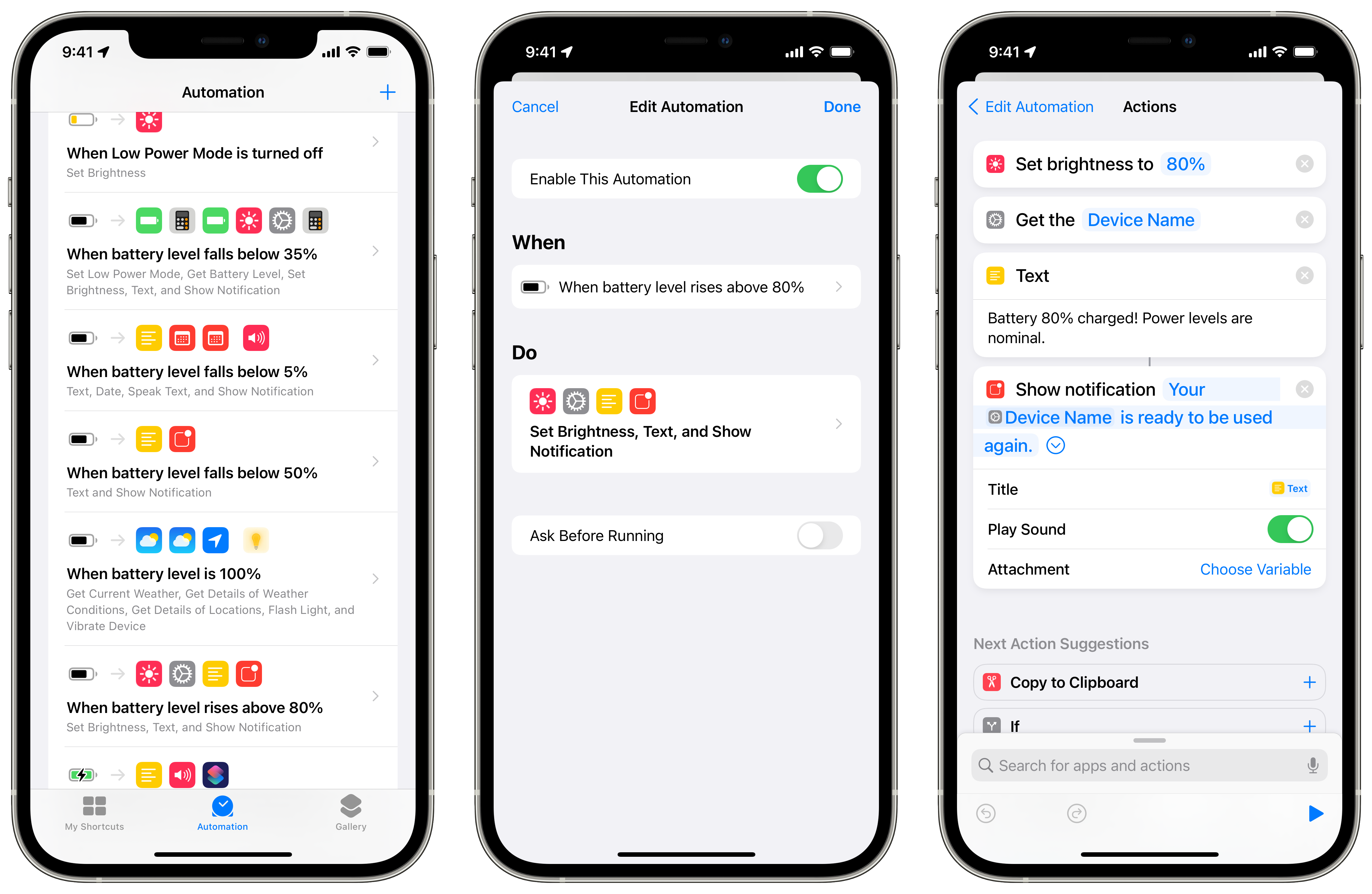 When Battery Level Rises Above 80% — www.matthewcassinelli.com

When battery charges above 80%, this turns the brightness up and sends a notification that it’s ready to be used again.

Built to replace the Low Power Mode setting, this is useful for getting prompted to charge before it’s already too late: 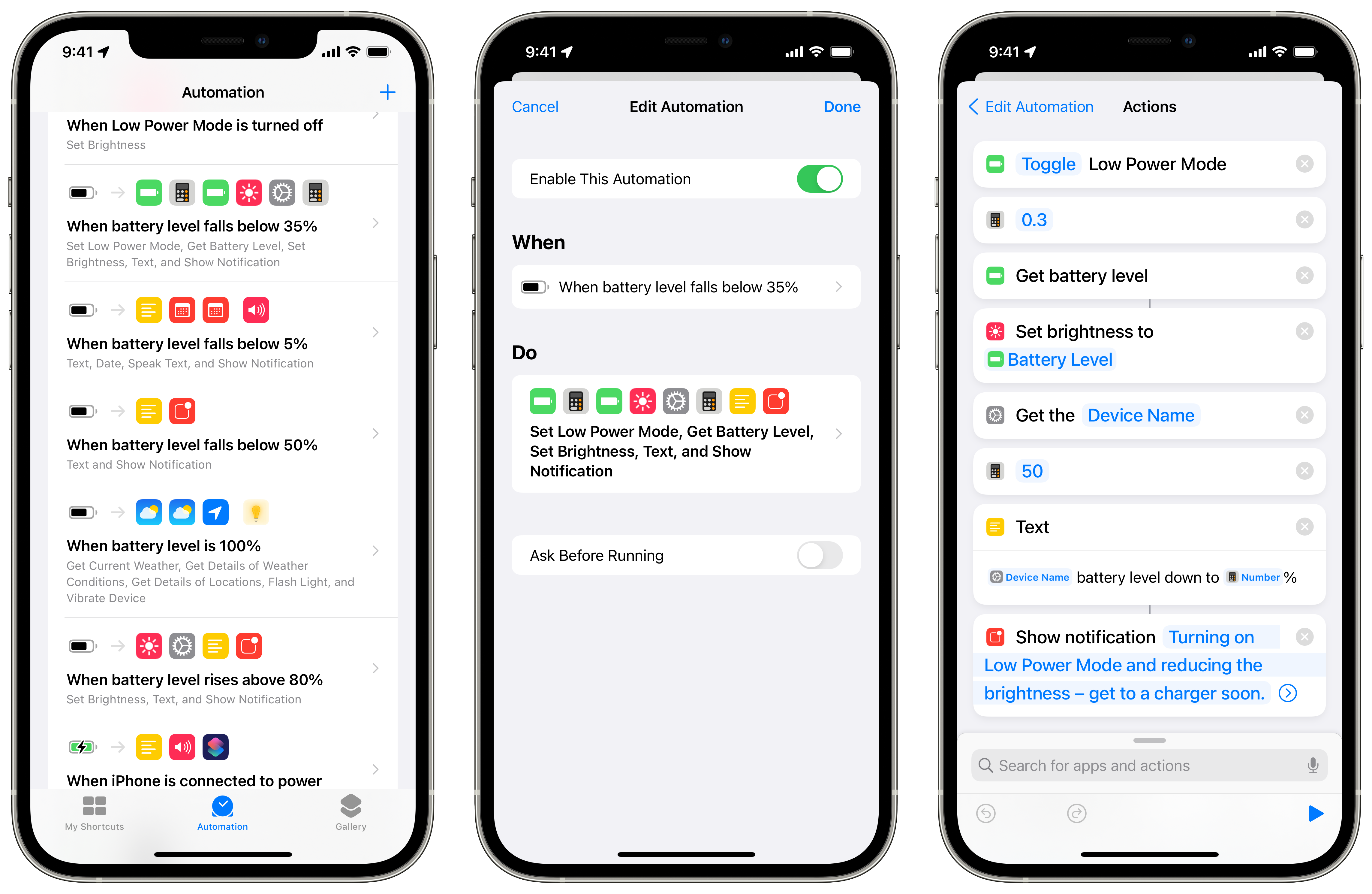 Toggles Low Power Mode at a specific value above the default 20%, then sets the brightness to match and sends a notification suggesting you get to a charger.

This is a last resort for anyone who might not realize they’re down to 5% º this REALLY gets your attention by shouting out, but only during the daytime – and yes, it works quite well: 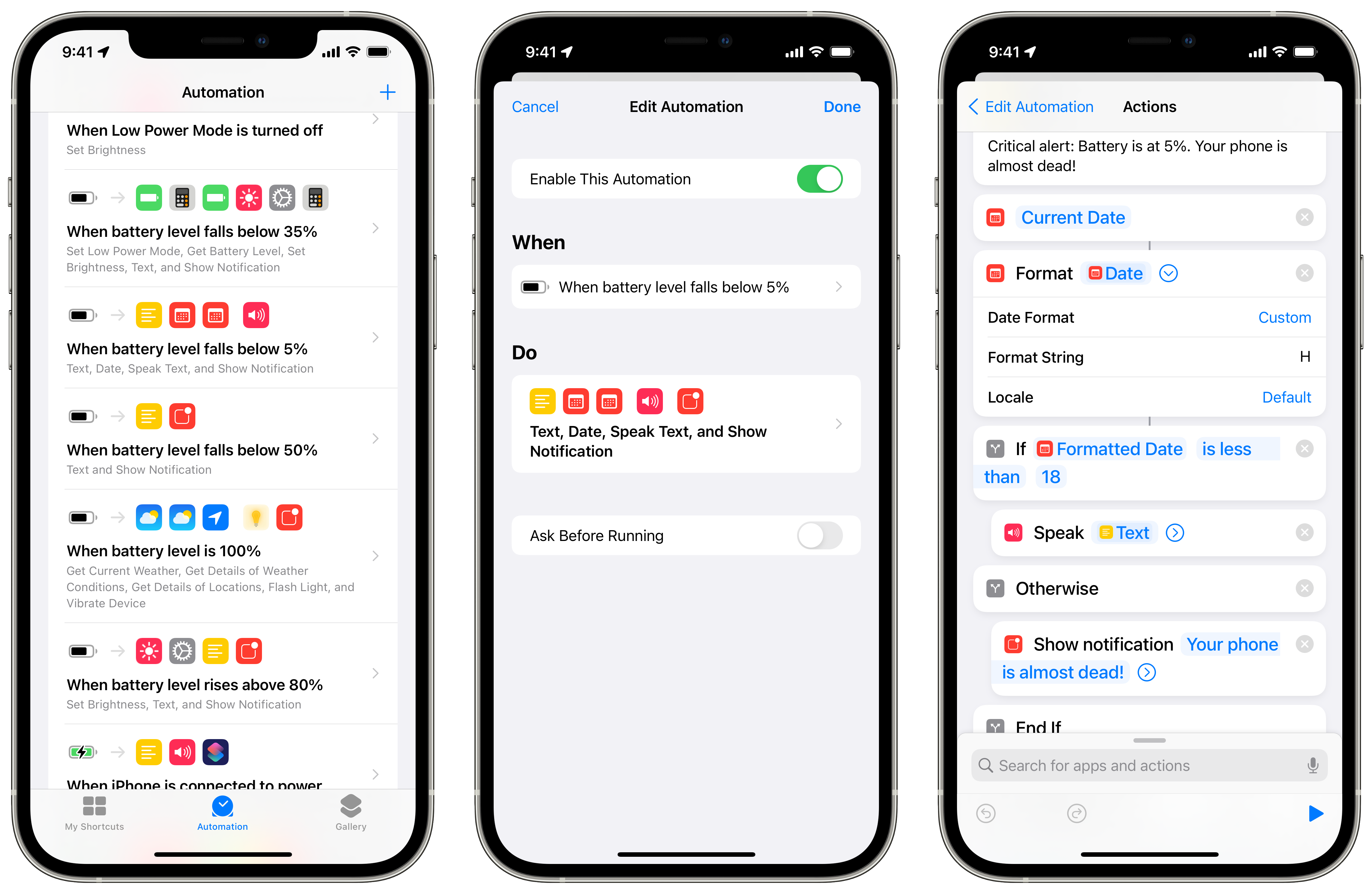 Sends a critical alert message that your phone is almost dead, delivered as Spoken Text using the Fred voice if the current time is before 6pm or as a notification only afterwards.

That’s all this week folks – I’ll be back in two weeks!

Hope you all have a good start to your August 😊 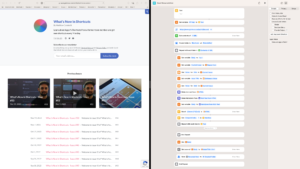 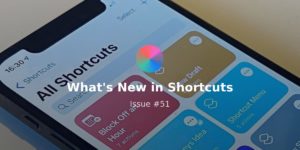