Welcome to Issue 60 of “What’s New in Shortcuts” – this week we saw a new beta, which means it’s time to file new Feedback to Apple! 🙃

While things are steadily improving on that front, the community has been leaping forward – today’s issue has some exciting shortcuts from John Vorhees from MacStories, plus there’s two new Mac apps folks should try out.

I also covered some stories from Six Colors that talk about what’s possible with Shortcuts, some ideas from the community, and a set of five folders for Read Later for my members just below – enjoy:

While my Catalog is continuing development, I am beginning to share some of the collections I was saving up – and this first batch in December relates to Read Later apps.

I have a larger write-up coming out soon, plus some app-to-app transfer tools to share as well, but I wanted to give folks in my membership access to the folders now.

Here’s 30 new shortcuts across 5 folders to use with your Read Later system:

Robb on Twitter had the great idea to improve upon the “Show my vaccine card” shortcuts that have been popular this fall with the addition of “Start Guided Access” so that anyone you might have to hand your phone to can’t do anything else (via Kyle Sherman):

You can use Guided Access to temporarily lock your iPhone into single app mode in case you need to hand it to someone for scanning. pic.twitter.com/kZi5UzSKaS

Marco Dengel shared a shortcut he uses that triggers via an NFC tag and uses the Soro app for Sonos to cast his music to his speaker – check out the video on Twitter:

I built an NFC-triggered shortcut which selects a random episode of @3Fragezeichen & plays it on my Sonos speaker. There’s a Sonos shortcuts app (named Soro by @idevecono) which I used together with my Spotify shortcuts to simulate a @tonies_de-like audiobook player on my iPhone. pic.twitter.com/ciq6Hg0YPt

Patrick Wayne shared a good idea that finally explained the purpose of GoodNote’s only action to me – their Quick Note action was designed to be used with a Personal Automation for Apps, set to open GoodNotes when Notes is opened from a tap of the Apple Pencil on the Lock Screen.

I use @GoodNotesApp on iPad for all my handwritten notes, pdf review/markup, digital planner document. users of #iPad & #ApplePencil can use Automation w/in Shortcuts app to make your iPad open to specific notebook (or quick note) in GN when touch Apple Pencil to lock screen https://t.co/7l1tdNh38u

The folks at Alfred also shared this post from Thought Asylum about his Alfred workflow for running shortcuts – it’s got support for inputs, pulling from folders, and a ton of options, definitely worth checking out:

I recently updated my Macbook Pro to macOS Monterey, and with it I got access to running Shortcuts on the Mac. Being a long time power user of Shortcuts, all the way back to the first release of Workflow,it was quite exciting to get my hands on the app. I’ve been enjoying experimenting with it, but I decided I needed to improve the accessibility. Enter one of my favourite Mac apps, Alfred.

💻 Mac Apps to Check Out

Pedro José Pereira Vieito saw the oddity of Shortcuts for Mac missing a Share Sheet option for running shortcuts and decided to fix it himself – with ShareBot, a simple tool that puts your shortcuts into a Share extension option and lets you run them from a pop-up menu. Right away, this is an app every Shortcuts for Mac user should get – it’s $2.99 on the Mac App Store:

Introducing ShareBot: The missing Share Extension for Shortcuts on macOS! ShareBot allows you to run shortcuts directly from the share menu of any app, just like on iOS and iPadOS.

Sandre Sorhus is also back with another free Mac app, this time taking the networkQuality command line tool and wrapping it in an application—with a shortcut too—for monitoring your network speeds:

I made another (free) Mac app:

The Yoink app shared a good example of putting their Shortcuts actions to good use – you can send a file directly into their floating dock by way of Shortcuts instead of drag-and-drop:

Using a #macOS #Monterey #Shortcut, you can move files currently in @YoinkApp via Contextual Menu in Finder, or even a keyboard shortcut 🥰
If you don’t feel like drag-and-droppin’, Yoink’s Shortcuts will help you out! pic.twitter.com/Z7b3CQ7621

Diagrams for Mac is a simple but handy tool for generating, well, diagrams and using those to understand something like a business process or workflow – they’ve recently added Shortcuts support for creating new documents with various presets, which could be handy for folks regularly generating new diagrams:

I missed this story earlier in November and I am glad I came back across it, because Jason Snell wrote up a quick link to Drew Kerr’s solution in the Automators forum for finding the current Focus mode – it uses JavaScript for Automation to look at the Do Not Disturb file in the users’ library to do so.

I really wish we had this functionality natively in Shortcuts, but for Mac users, there’s an option now – and with something like Shortery’s automations, this could theoretically get logged in the background every time you can Focus on iOS as well:

Jason Snell also delved deeper into the more developer-focused features of Shortcuts for Mac – namely the Command Line Interface (CLI) that enables running of shortcuts with inputs and more right from the Terminal. I think its to forget exactly how powerful this stuff is, especially in the right hands:

Jason also put together a proper write-up of something I forgot hasn’t been covered officially otherwise – if you use the Add to Dock function, you are actually generating an .application file for that Shortcuts that lives in your file system.

If you put it in /Applications/, apps like Alfred can find and launch them, but you can also put these anywhere in your file system – and have your functional shortcuts live right next to the files where you’ll be using them:

I owe John Vorhees from MacStories a beer, at the very least, for putting out this story:

How to Batch Convert Shortcuts for Use Throughout Monterey and with Other Automation Apps – MacStories — www.macstories.net

My latest Shortcuts experiments began in earnest on my way back from Rome. I stopped in Ireland for a few days to deal with COVID testing and start ramping back up to my normal work routine. I wasn’t quite ready to tackle the day-to-day yet, so I decided to revisit a Shortcuts experiment I had

In this piece, and a companion on Club MacStories, John shares the meta work he’s doing to automate Shortcuts for Mac and how shortcuts can be triggered via other apps – he’s made a fantastic series of 4 shortcuts:

3. Script Apple Builder that skips that altogether and generates an actual applet itself, and

4. PopClip Extension Builder that does the same thing but wraps it in a PopClip extension so you can run the shortcut right on top of selected text:

I wanted to share these because, last week, I wrote about how, while I loved John’s Stream Deck solution, it didn’t work for me because I literally couldn’t afford to sit there and click Add to Dock over a thousand times (or do it for every new shortcut).

And after writing that, I realized over the weekend I could add a custom keyboard shortcut in System Preferences and let MacOS manually select the Menu item for me.

In a bit of simultaneous invention, John used the same method with Dock Applet Builder, but also took it way further by using Get My Shortcuts and Open Shortcut to physically open the shortcut for you and uses Better Touch Tool’s new actions for Shortcuts for Mac to trigger keyboard commands and press the keyboard shortcut for you.

I love this solution, because not only is it a super clever way to get around the problem, as well as a callback to how everything used to work in the Workflow days, but also because the .applications created maintain the shortcut icons too – and they’re Mac-ified with depth as well.

(John does note that the obvious limitation here is adding way too many Shortcuts to your dock, so keep in mind that you’ll have to remove them if you just want the .application file they generated.)

Even better, for folks like me, he also created a more advanced version that fully generates an applet for your shortcut while bypassing this Add to Dock method altogether. While you’ll need to be a Club MacStories member to read about the method and get the shortcut yourself, I just wanted to highlight it in particular because it’s verygood – John’s shortcut uses a clever method inside Shortcuts, a command-line utility I wasn’t aware of, and a handy app for making Mac icons too.

On MacStories today, I published the results of my earliest experiments with building shortcuts to batch process other shortcuts for use elsewhere in macOS and with other apps. The two shortcuts, Script Builder and Dock Applet Builder simplify the process of setting up multiple shortcuts as AppleScript .scpt files and Dock applets. Each has its own strengths, including being relatively simple.

While some of this may be a bit meta for new users, the main impact that tools for high-end users like me can have is simply that I’m actually a lot more productive, can take advantage of my own shortcuts more often, and in the process understand them, generate more, and share them with everyone else.

We’re a little over a month into Shortcuts for Mac and already most of the missing features have been automated, there’s a health ecosystem of third-party apps providing truly useful actions, and power users are unshackled from the limitations of iOS and can harness the full potential of accessible user automation.

I didn’t even realize this when I started writing this Spotlight, but Shortcuts for Mac, despite the current growing pains, is getting more exciting every week.

I truly can’t wait to see what the next year will bring to this platform. Plus, the downstream effects on iOS and the growth across Apple’s devices will only continue to improve as well… Shortcuts’ future is looking bright 😎

That’s all for this week! Have a good weekend 🙏 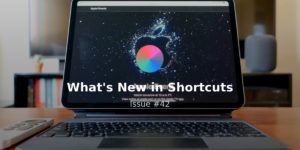 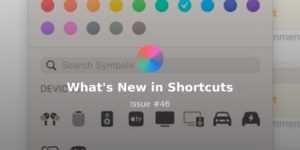