I had the pleasure of being a guest host on this week’s iOS Today:

Thanks to Rosemary for having me on again — and Mikah for taking a week off so I could host in his place! 🙏

END_OF_DOCUMENT_TOKEN_TO_BE_REPLACED

Federico Viticci is back again with his 8th annual review of Apple’s primary OS, this time covering iOS 16 in 15 pages on MacStories.net.

In particular, I wanted to highlight Part 7, which deals with Shortcuts:

The last point is both important and likely the reason why some Shortcuts power users will be disappointed by this year’s update. There isn’t a lot for them in this new version of the app: as we’ll see in my iPadOS review, there’s no integration with Files quick actions, no support for Stage Manager actions, and no system-wide hotkeys still. If you’re an advanced Shortcuts user and were wishing for more system-level enhancements in addition to stability this year: I hear you, but we’ll talk about this later on.

What we do have in iOS 16 is a fascinating new feature to get newcomers started with the Shortcuts app, a grab bag of useful new actions for Apple apps, and some solid developer-related enhancements that will make third-party actions much better than before. Let’s take a look.

In the three pages dedicated to everything Shortcuts, Federico covers App Shortcuts, new actions, and other Shortcuts improvements.

I agree with most everything Federico covered, although I do suspect App Shortcuts still prove useful to power users like him and I rather than mostly aimed at new users (as he posited) — it’s nice to not have to set up basic shortcuts for my apps, and I can focus my custom shortcuts on only the more advanced use cases instead. 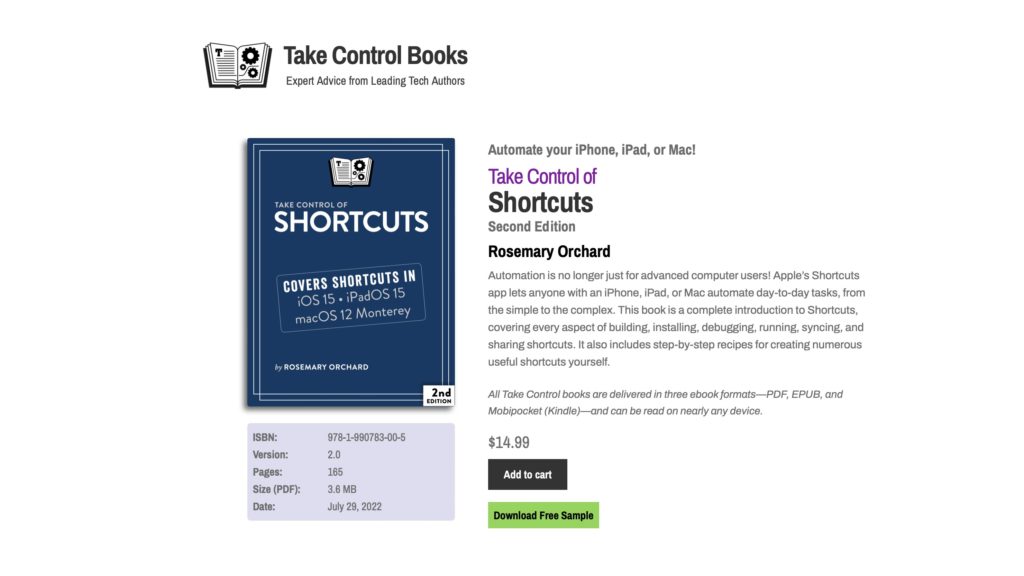 As part of Take Control Books, Rosemary Orchard has updated her book Take Control of Shortcuts to the second edition, now covering iOS 15, iPadOS 15, and macOS Monterey now that Shortcuts has expanded to the Mac.

Here’s the description of the book from their website:

Automation is no longer just for advanced computer users! Apple’s Shortcuts app lets anyone with an iPhone, iPad, or Mac automate day-to-day tasks, from the simple to the complex. This book is a complete introduction to Shortcuts, covering every aspect of building, installing, debugging, running, syncing, and sharing shortcuts. It also includes step-by-step recipes for creating numerous useful shortcuts yourself.

Take Control also notes that the book will be updated for free during the iOS 16 cycle for anyone who purchases this edition, so that means you’re covered for everything new this upcoming year as well.

If you don’t already know Rosemary, you should familiarize yourself — she’s the host of Automators, iOS Today, and Nested Folders, plus she’s an all-around amazing person.

She’s taught me so much and anyone who uses Shortcuts should get her books & listen to her shows — congrats on the launch, Rose!

This Tuesday, I had the pleasure of being as a guest on iOS Today with Mikah Sargent:

Personalize your custom Focus modes in iOS 15 or iOS 16, from silencing specific notifications to switching screens based on location.

Watch the full episode on TWiT or  on Apple Podcasts.

Today while working on this week’s upcoming newsletter, I came across a tweet sharing this story from r/shortcuts from last month where u/AngriBuddhist shared how “Shortcuts has literally changed my life”:

Prior to being a Workflow/Shortcuts user, the closest thing to automation/scripting that I’d done is make some pretty in-depth spreadsheets. For the last 5 years, though, I’ve been using Shortcuts to create daily reports for work. Manually, these would take more than 24 hours a day. I do them in 10-20 minutes. I’ve created other weekly reports that would also take more than 24 hours to create manually. With Shortcuts, it takes about 5 minutes.

No one has tried to create these types of things in my company because of the complexity and time investment. Without Shortcuts, I wouldn’t have imagined these projects in the first place.

These reports have had a huge impact on manager productivity, financial results and my visibility within the company.

Today, because of those results and visibility, I was offered and accepted a new role in the company, moving from 4 days a week of manual labor to 3 days of admin work from home, making the same salary[…].

I love seeing posts like this and I’m super glad this Shortcuts had such a big impact on this Redditor — what a great testimonial for the real-world impact that automation can have on one’s life.

END_OF_DOCUMENT_TOKEN_TO_BE_REPLACED

Last Friday, for episode 435 of the Clockwise podcast, I got the chance to join Dan Moren and Mikah Sargent again along with Rosemary Orchard to talk about:

Our excitement and trepidation regarding Passkeys, our thoughts on auto-generated Siri App Shortcuts, the most exciting features announced at WWDC, and our inevitable (?) USB-C future.

Check out Clockwise on Relay.FM, subscribe in Apple Podcasts, and listen to the episode below:

END_OF_DOCUMENT_TOKEN_TO_BE_REPLACED

As part of Club MacStories, Federico Viticci published an Automation Academy guide on Tips for Optimizing Your Shortcuts for macOS Monterey.

In the post, Federico explains some tips he’s developed over the last six months working on the Mac that are super useful for Shortcuts users, especially if you’re coming from the iPad — things like changes with variables, how to use actions native to Mac from the Automator experience, and innovative ways to utilize AppleScript (that I’m definitely going to adopt myself and integrate into my own shortcuts).

Federico’s annual pre-WWDC piece is out and you should read all 8,000 or so words of it, particularly this section about Shortcuts:

While the Shortcuts app shouldn’t have been released in those precarious conditions last year (it should have been labeled a beta), my usage of the app has increased alongside Apple’s work on improving its performance and stability;

[T]oday, I consider Shortcuts for Mac an essential tool in my workflow and, in some ways, the most important change Apple could have brought to allow people like me to try macOS again.

I agree with the overall conclusion of the piece, but this summary of Shortcuts on iPad vs. the Mac struck a chord with me as well:

END_OF_DOCUMENT_TOKEN_TO_BE_REPLACED 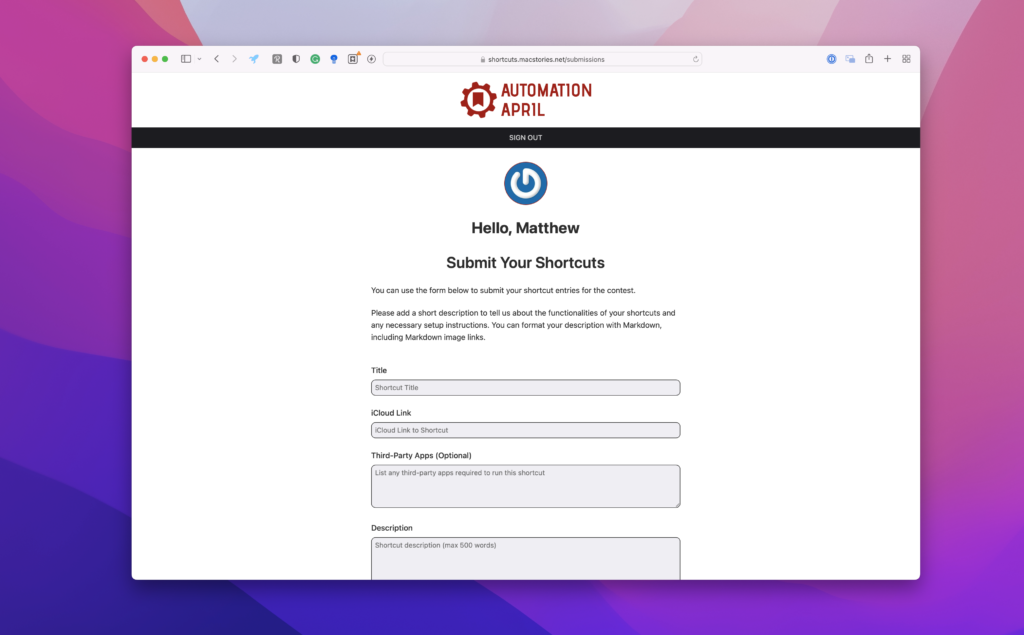 I am super happy to announce that I’m a judge for the new Shortcuts contest hosted by MacStories as part of their new “Automation April” campaign – the contest is live now!

As part of the Shortcuts contest, anyone can submit two shortcuts to be judged by a panel of Shortcuts users, including myself, for Best Shortcut in five categories:

Join me today, Monday, March 7 at 4pm Pacific/ 7pm Eastern with special guest Chris Lawley as we talk about his latest videos and the iPad versus Mac debate.

We’ll talk about Chris’ latest videos, the upcoming Apple event, and how we’ve been using the Mac (and what that means for iPad) since the M1 transition last year.

Come join us in the chat!

New issue of my Shortcuts newsletter is out:

Welcome to Issue 32 of “What’s New in Shortcuts” – what a week for Shortcuts tweets!

Florian Bürger shared his Fjorden automation (say that five times fast), an important SOS shortcut is making the rounds on TikTok, there’s a handful of new apps with great Shortcuts support, and an impressive list of ideas straight from the community.

Plus, stay for the end as I guide you through my super-intelligent choice to delete my entire Shortcuts database on the Mac – and learn how I barely made it through the other side with my library (partially) intact:

Check out my stream with special guest Matthew Bischoff, cofounder of development studio Lickability, from Friday, February 11th where we talked about their experience getting into Shortcuts for Mac:

We discussed Matt’s recent deep dive into Shortcuts, Stream Deck, Bunch, and more to build the automations they’ve always wanted for their personal and work life but never had the time to create…until now.

Feel free to leave comments in the chat replay and I’ll make sure to answer them. 🤓

New issue of my Shortcuts newsletter is out:

Welcome to Issue 31 of “What’s New in Shortcuts” – this week is full of feedback reports, beta testing, and, as always, great ideas from the Shortcuts community.

I was up to no good with Jason & Dan on the stream, Federico followed up an impressive week with another impressive shortcut, the Albums app & Ochi caught my eye, and and Stephen Robles & Chris Lawley shared their expertise on YouTube.

Plus, I’ve got a stream with Lickability cofounder Matthew Bischoff coming this Friday, as well as some new posts dropping throughout the week – enjoy:

For episode 435 of the Clockwise podcast, I had the pleasure of joining Dan Moren and Mikah Sargent as a guest along with Jean MacDonald to talk about:

How Apple should address AirTag misuse, the techniques we use for cleaning out our inbox, whether Twitter’s “Close Friends” feature interests us, and our applications for a smart foot pedal.

Check out Clockwise on Relay.FM, subscribe in Apple Podcasts, and listen to the episode on the web below: